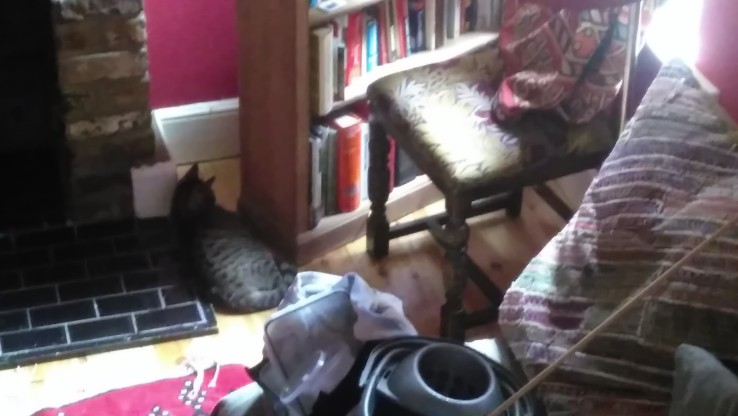 . . [Part of] The story of Stella is the story of Ernest Boulton. Born in Tottenham in 1848, he spent much of his adult life — his twenties, thirties and the best part of his forties — dressed as an “effeminate and fully slapped-up queen”. Sometimes performing on stage, sometimes a sex worker “trolling at night”, Stella had a string of men. But the love of her life was a Tory MP and aristocrat, Lord Arthur Pelham-Clinton. He gave Stella a ring. He paid rent on a flat where they enjoyed sex and a (briefish) life as man and wife.

Avoiding vertigo, last night we sat on the ground floor side bench at Hoxton Hall, which swung into life in 1863 and is therefore the perfect place to stage Stella the show. Written almost exquisitely by Neil Bartlett with truly superb design, lighting, sound and music, it was performed flawlessly by Richard Cant as Old Stella and Oscar Batterham as Young Stella. The third excellent member of the cast is David Carr. He plays The Attendant.

The Attendant. The Attendant. Who or what is The Attendant? Dressed in a black suit with black gloves and a long black overcoat, he creeps about the stage, the menacing figure who might be a killer, or a ghost, or a bouncer, but is then a letterbox, a dressing table, a butler, a waiter, then (again) merely a prop, then (perhaps) a bogeyman, then a cabbie, or driver of a hearse, or hang on, yes, he’s death itself. Despite these multiple roles, he remains voiceless, the silenced black male spooking about the back of the stage. I heard someone in the audience say, ‘I didn’t even notice he was there!’ Was that deliberate direction? The invisible, voiceless, frightening black male? The danger, the threat, the potential for violence… always there but not there but there. Entirely unnecessary: the play did not need The Attendant. So what was he there for?

Other highly critical responses from friends have focused more on the ‘miserabilist’ narrative that emphasises — relentlessly, they feel — the here-we-go-again ghastly life of the tragic gay man, the unhappy transvestite’s joyless struggle. Not only is it clichéd, apparently it’s also wrong. If you read Neil McKenna’s book Fanny & Stella, what you get — I’m told I must read it– is the overwhelming courage and joie de vivre and abandon of two men who were determined to live their lives to the full, dressed as women if they bloody well wished.

Having said all that, I’d still recommend you go see the show, especially while it’s still on at Hoxton Hall. The performances are very strong. All three men excel on stage. And I loved a lot of the writing, the narrative structure & form.

The talk was fine, she said, but did you have to read that sentence? I didn’t know what she meant. I’d read for ten minutes, give or take, and had covered several pages and many sentences of the book. Which sentence was she referring to? The one about the towel, she said, smiling through the irritated creases in her face, almost pitying my confusion. The towel? What was wrong with the towel? But she didn’t answer. She said I could have left it out. Skipped over it, I think was her expression. Why would I leave out bits of my own book? Why would I skip over details that matter? Now we were both confused. Several of the undergraduates came to complain, she said. I think she also used the word unsettled, although when I retold the story I chose the word traumatised. Not that this made a lot of difference. There I was, reading pages from my chapter about Joâo Faria, a friend from Luanda who was physically and psychologically tortured by the MPLA government in the 1970s. I read (p.115) the details of how they ‘broke his nose then made him suck up his own blood from the floor’, of how he was ‘forced to remove staples from the elbow of another prisoner who had been tortured with a stapler’, and how he was subjected to the n’guelelo or eastern torture. I then read Amnesty International’s description of this torture, which involved: ‘tying the victims’ arms and legs together behind their backs, usually with wet rope that contracts; these cords being sometimes also tied to the victims’ testicles, then attached to two curved sticks around the victims’ heads, the two sticks perhaps being tightened by a tourniquet putting tremendous pressure on the victims’ temples’. No one, apparently, had a problem with this section. This was fine. The bit that wasn’t fine was this bit here, the bit about the towel (p.117): 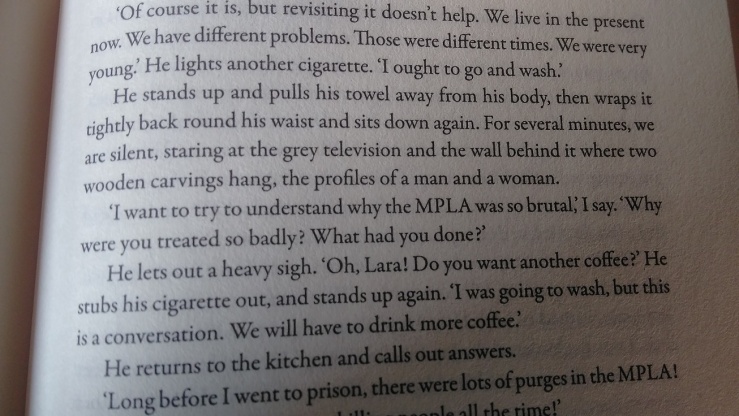 Travelling around the US, speaking at various colleges, I told other academics and students about the curious incident of the towel in the middle of the African studies seminar. I vented my frustration at what seemed to me to be an excessively self-centered response not only to my reading, but to the matter of Faria’s life and trauma. In the Name of the People is a book that investigates the deaths of thousands of people, and the imprisonment and torture of others caught up in the events of the 27 May 1977 in Angola. To be offended by the description of a towel being opened and closed in the midst of all this misery and memory is curious, no? In response, a number of professors spoke of the culture of sexism and rape on campus in the US. Stanford, I was told more than once, was the worst of all.

Certainly, Stanford has a problem. I was stunned and saddened and confused by the way students and staff spoke about their relationships with each other, especially when they were also members of the opposite sex. Trust was absent. Women were afraid of men, and men were afraid of how women would interpret even their most mundane behaviour. Everyone, I was told, avoids touching everyone else. Everyone avoids conversations that might enter the realm of the family — for example, how is your wife? — and if, somehow, chatter strays that way, abrupt and awkward efforts must be made to intervene immediately, or (worst case scenario) to deconstruct at a later point with the help of a therapist. That was another thing: everyone, but everyone, had a therapist. Caveat: I was only there for a couple of days, so I am no expert. But I was struck, from the moment I arrived in Palo Alto, by the strangeness & un-human quality I felt throughout my stay. Stepford Wives. Solaris. Guinea pigs. Robots. Science. Spectrums. I don’t know what I am doing here. I don’t feel entirely safe. I’m glad I’m not staying here. Something’s going on beneath the surface, or is it above the surface? I don’t know and I’m not equipped to work it out. The instinct says it’s dangerous. Or hilarious, and ridiculous, and terrifying.

The urge to stamp on him. The certain hope this was the top of Trump’s head, his entire body beneath it, pushing up the pavement, coming here, to my hood, to get us, to get me. And I spotted him. My chance to stop him, to crush his crown once and for all. I saw the blood. I saw the broken skull. I saw the brain oozing out. I pushed my umbrella through one of the cracks, working the ferrule down to the mass of thalamus. I heard him holler. I pushed harder. Through the thin sole of my boots, I felt the strain on the tarmac soften. He was relenting. Sinking. One last hard poke. The pavement flattened. The cracks disappeared. The leaves and the fag butt and the piece of gum framing the remains perfectly. 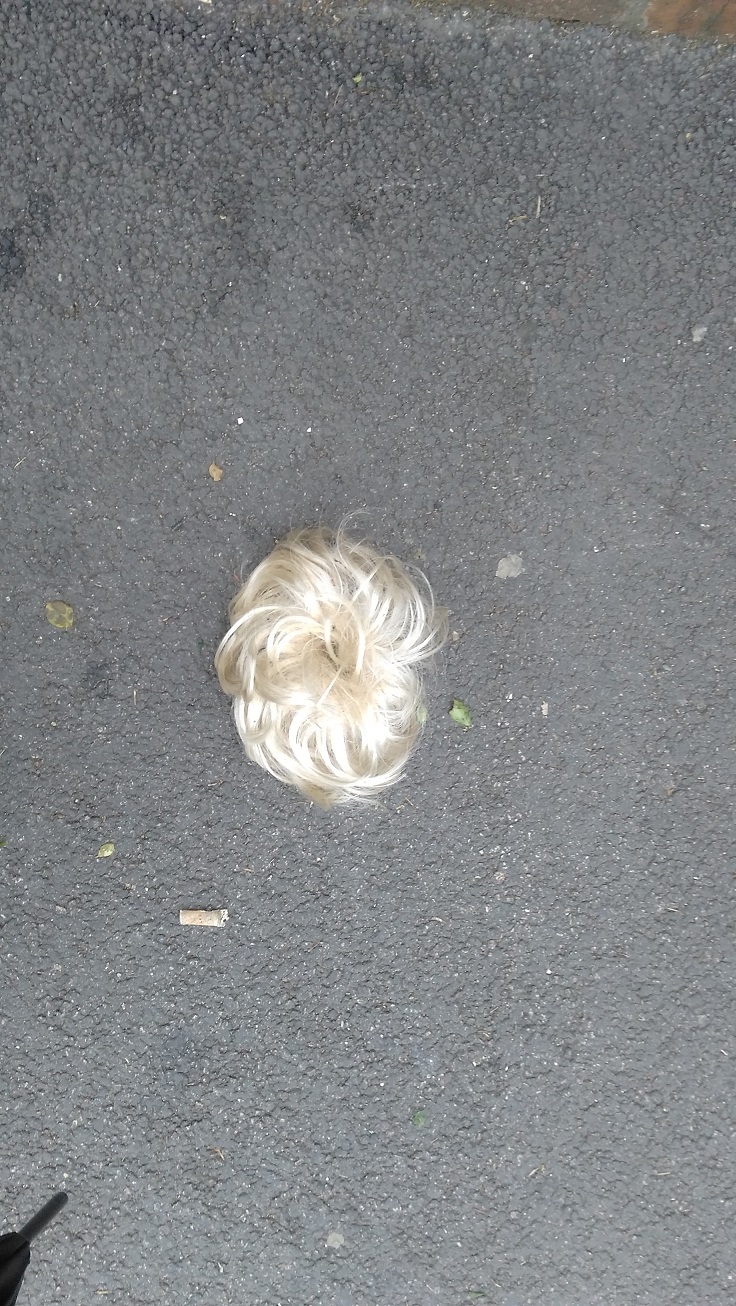